It’s a DC dominated #NewComicsDay as we get some promising new titles. Here is Smurfs High Five to help you narrow down what you’re looking for. 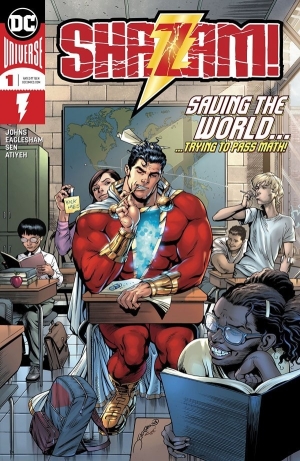 Shazam #1> The superstar team of writer Geoff Johns and artist Dale Eaglesham reunite to launch the first all-new SHAZAM! monthly title set in the DC Universe in almost 20 years! (What took you guys so long?!)
Teenager turned super-hero Billy Batson struggles to balance school and superheroics! (Guess which one is more fun?) But when Shazam unlocks a shocking secret deep within the Rock of Eternity, it challenges everything he knows about the worlds of magic and his family’s future as its champions! Also, witness the bizarre team-up of Dr. Sivana and Mr. Mind as they set off to build a society all their own! Don’t miss the start of an epic run in the making as “Shazam and the Seven Realms” begins! (S) Geoff Johns (A/CA) Dale Eaglesham

Smurfs Take> One of the most under used characters in the DC Universe. I have always had a soft spot for this character but when you have Superman you tend to be overshadowed. I know its hard to write for a character who is a kid without making more focused on younger readers. When they brought him back in one of the restarts as a back story for the Justice League books I was impressed. I know it lost momentum but I still think that goes back to making the character relatable. Regrettably we just can’t have the Shazam from Kingdom Come pop up but the potential for this title is huge. 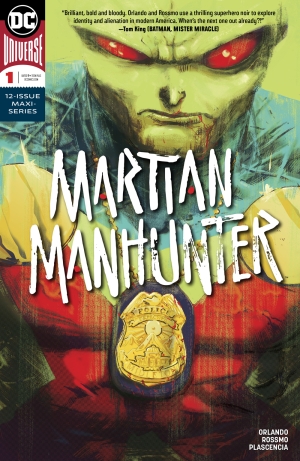 Martian Manhunter #1> No matter what you know about J’onn J’onnz, you’re not prepared for this! The acclaimed team of writer Steve Orlando and artist Riley Rossmo (BATMAN/ THE SHADOW, BATMAN: NIGHT OF THE MONSTER MEN) reteam for a reinvention of the Manhunter from Mars in this twisted, unexpected series. Back on Mars, J’onn was about as corrupt as a law officer can be, and when a reckoning comes for his entire society, he’ll get a second chance he doesn’t want or deserve! One shocking murder, and an unexpected fragment of the Mars he lost, will change his life-and the course of the Earth-forever! (S) Steve Orlando (A/CA) Riley Rossmo

Smurfs Take> Another character that has been hard pressed to find something other than a supporting role. Always left on monitor duty it seems for the Justice League but there is so much more they could do with J’onn. You think with a character that literally can become anything it would be much easier to find a home and a storyline for him. This might be that chance. 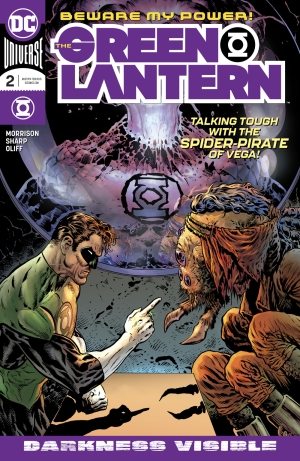 Green Lantern#2> Someone is transporting a mysterious cargo out of the Great Void, and it spells trouble for the universe at large! Hal Jordan interrogates a member of the Spider Guild for answers and uses his pheremones as an interrogation tool, but can he extract the info in time?! Meanwhile, Volgar Ro makes a play for Earth while its emerald protector is off-world! (S) Grant Morrison (A/CA) Liam Sharp

Smurfs Take> For the first time in a very long while it felt amazing to read a Green Lantern comic. How the story was told, the art, just the feel was something of greatness waiting to break through. Yes it was only one issue but what an issue. Mystery, monsters, and Hal Jordan.

Doomsday Clock #8> The critical and commercial hit series by Geoff Johns and Gary Frank continues following the shocking revelations of last issue. As the truth behind Dr. Manhattan’s actions against the DC Universe are revealed, Ozymandias turns to the only being who can stop him: Superman. (S) Geoff Johns (A/CA) Gary Frank

Smurfs Take> The only thing I would change about this series is when it comes out. It’s worth the wait and a great story that I didn’t think DC could pull off but it’s fantastic.

Killmonger #1> THE BRUTAL TALE OF A MAN WHO WILL STOP AT NOTHING FOR FREEDOM…
One day, Erik Killmonger will rise up and attempt to steal the throne of Wakanda. The throne he believes he is owed. But long before he became “Killmonger,” there was a boy known as N’Jadaka. A boy who was stolen from his home and taught only the world’s cruelties. A boy who knew the Black Panther only as a fairy tale, a whisper from strangers. This is the story of a man who driven by revenge. This is the legend of Killmonger. (S) Bryan Edward Hill (A/CA) Juan Ferreyra

Smurfs Take> I love that out of the movies we are getting series like this. A way to connect the characters to the Marvel Universe in a more complete fashion. One of those characters that needs a bigger expanse is Killmonger.