#NewComicsDay is here and it’s a whooper as it looks like every publisher is trying to make a strong close out for the year. You really cant go wrong but if you are looking for a place to start here are Smurfs High Fives to get you going.

Batman Who Laughs #1> Left rattled by the events of DARK NIGHTS: METAL, Bruce Wayne must come face to face with the nightmares spawned from the Dark Multiverse. But even though evil devoured evil in the collapse of Challengers Mountain, the Dark Knight still has his doubts. He discovers that the Batman Who Laughs not only survived the fight with The Joker at the end of METAL, but now he is enacting a sinister plan across the Multiverse-something both terrifying and oddly familiar. But when Bruce Wayne realizes the only way to stop this madman is to kill him, he must consider violating the very rule Batman won’t break…the same rule that created this insatiable villain-the Batman Who Laughs! (S) Scott Snyder (A/CA) Jock

Smurfs Take> If there was one character that needed more story it was this one. Holy Crap! Just looking at the character leaves me unsettled. The Metal series was great and everything coming out of that (Thomas Wayne) has been a very engaging story. My only worry is making the Bat Family even more complicated by brining in the Multiverse. 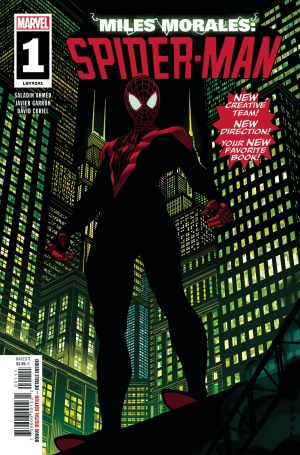 Miles Morales Spider-Man #1> Balancing his normal life, school, parents, etc…and super-heroing has never been easy, but when the Rhino and a cadre of mysterious criminals start plaguing Brooklyn, things take a dark turn. And Miles doesn’t even know the half of it yet. Eisner Award-winner Saladin Ahmed (BLACK BOLT) and Young Gun Javier Garr n (ANT-MAN & THE WASP) bring you the latest incarnation of the coolest character in the Marvel Universe! (S) Saladin Ahmed (A) Javi Garron (CA) Brian Stelfreeze

Smurfs Take> New series just in time for the new Into The Spider-Verse movie this week. I have always been on the bubble with Miles but over the years has come out of Peters shadow. I would like to see him become more cemented in the Marvel U with his own batch of villains. I know that takes time and I fear might be harder than anyone thinks.

Smurfs Take> It would be Christmas without a new Hellboy story.

Avengers #11> THE AVENGERS WORLD TOUR COMES TO A SHATTERING CONCLUSION!
To deal with the fallout from last month’s world-shaking issue #700, the Avengers organize an international super hero summit, gathering heroes from the most powerful nations on Earth. But no one was expecting the shocking new representatives of the United States. The world is about to become a far more dangerous place. Especially for the Avengers. Plus Hulk and Thor try to go on a date. (S) Jason Aaron (A/CA) Ed McGuinness

Smurfs Take> I love this book. The chemistry of the characters, the story telling, it’s just a solid read that has yet to disappoint me.

Superman #6> It’s the moment you never thought you’d see-Superman must team with General Zod to defeat Rogol Zaar or risk banishment for all three in the cold prison of the Phantom Zone forever. Whatever you do, do not skip to the last page-the end of this issue changes the lives of Superman and his family forever as the Unity Saga continues! (S) Brian Michael Bendis (A/CA) Joe Prado, Ivan Reis

Smurfs Take> There have been a few times for me that Superman was the perfect blend of art and story. Bendis and Prado have surpassed any expectation I had for this book and are now at that top of that list. I don’t want to give anything away if you haven’t been able to read it yet but the work being done here and the characters being used is glorious.