A Million Ways to Die in the West Book Review 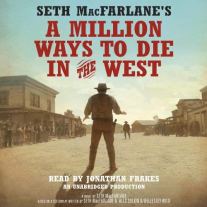 A Million Ways to Die in the West is an entertaining yet ridiculous book written by Seth MacFarlane. It is based on the screenplay of the 2014 movie by the same name. I have not yet seen the movie, so unfortunately I cannot compare or contrast it to the book. I will say that I did enjoy this book. I do recommend reading it, providing readers are okay with vulgarity and juvenile humor.

Author Seth MacFarlane is best known for his creative credits on the television show Family Guy. In the past decade MacFarlane has expanded his creative brand to movies, singing, and now books. 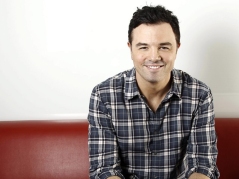 The novelization doesn’t take very long to read. It is written in plain modern American English and it reads at about a young adult skill level.

I chose to consume the story by listening to it in audiobook form. The audiobook was narrated by Jonathon Frakes. Frakes is best known for his character Commander Riker, aka “Number Two,” on the television show Star Trek The Next Generation.

Frakes voices the book adequately. He adjusts his pitch and tone to fit the different characters. He also avoids attempting to be too extreme with his portrayal of women and young characters. I appreciated this.

The story is quite fun and amusing. It takes place in a Podunk 1880’s Arizona town, yet modern language and references permeate the writing of the book. The most notable modern reference was the term ‘blumpkin’. I recommend immediately clearing your search history after searching out the term. It is NSFW (not safe for work).

The book tells the tale of a hapless down-on-his-luck sheep farmer, Albert Stark. Immediately, Albert is exposed as a coward and a loser. He backs out of a gunfight in which he ends up getting shot by his opponent anyway. Then the love-of-his-life, his prostitute girlfriend, breaks up with him. These events lead Albert into a downward spiral of depression and self-loathing. 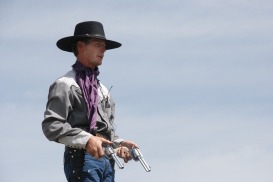 Enter the story’s protagonist, Anna Barnes. Anna is new to Albert’s town of Old Stump. She is hiding the secret of being married to a dangerous outlaw while attempting to live a normal, frontier life. She is tough, beautiful, and daring.

Anna befriends Albert and helps him overcome his negativity and self-hate through their misadventures. I don’t want to spoil the story, so I will not go any deeper into the antics that ensue.

If readers can get past the sophomoric nature of some of the characters and their accompanying vulgarity, then A Million Ways to Die in the West is worth the read.

The most vulgar content comes in the form of references to the acts that the two prostitute girlfriends in the story must endure. These women of the night nonchalantly speak of the lewd acts, such as performing the blumpkin mentioned above. Although the characters are written to easily breeze through these uncomfortable and disgusting acts, it is difficult to read them. It was definitely inappropriate to listen to them in a public setting.

The book’s protagonist and narration frequently remind readers of the plentiful assortment of ways to meet an untimely end in the frontier west. These are all presented with a humorous spin. For example, the town’s doctor seems to like to use unconventional and useless forms of “doctoring” that often leads to unnecessary deaths. Some forms of the doctor’s ineptitude are described through unneeded amputations, and “putting a blue jay on it” as a form of healing wounds and sickness.

If readers are uber-fans of Seth MacFarlane, or they really enjoy dirty comedy, then they should purchase A Million Ways to Die in the West. It is specifically perfect for those target audiences. However, if readers don’t fall into one of these two categories, I do recommend reading it but I do not see it as a keeper. I recommend borrowing it from the local library, or a friend. This book will not have significant value for a second reading.

If you enjoyed this piece please check out more amazing content at: