#NewComicsDay A trip to the stars the dark corners of the soul and everywhere in between. Smurfs High Five sponsored by All C’s comics this week sees a ton of options as the new year starts to ramp up. Don’t overlook Hulk, Superior Spiderman, and Batman but here are a few to get you started. Be sure to mention this at checkout at All C’s for your 10% discount.

Guardians of the Galaxy #1> WHO WILL STAND
The universe is on fire. Hundreds of worlds are at war. Never has there been such hatred and division across the cosmos. And in spite of all this, Thanos of Titan is still dead…or is he? Now, more than ever, the cosmos need the Guardians of the Galaxy…but in the aftermath of the Infinity Wars, who is left to answer the call? Featuring every cosmic super hero in the known universe by the THANOS WINS creative team of Donny Cates and Geoff Shaw! (S) Donny Cates (A) Geoff Shaw (CA) David Marquez

Smurfs Take> Oh how I have missed my Guardians. After everything that has gone on with the Infinity story line, Thanos dead or not dead it will be nice to get a few answers and just what is going on in the universe.

Crypt of Shadows #1> ALL-NEW HORROR STORY!
For Marvel’s 80th Anniversary we’ve gone into the vaults to bring back some classic titles from the Marvel of yesteryear…but maybe some vaults should stay closed! Something terrifying has broken free and crawled forth from one of the most terrifying corners of Marvel-dom, the CRYPT OF SHADOWS! Prepare for terror! The shadows are deeper than you think, and horrors lurk within… (S) Al Ewing (A) Garry Brown, More (CA) Kyle Hotz

Smurfs Take>  After discovering super hero comics the next greatest discovery was horror comics. Tales from the Crypt as a matter of fact and my young mind would never be the same again. There is just something about this that fits so well together. Able to give life to and a level of substance to the horror world that seems to have been overlooked for so long. This is fantastic.

Justice League #16> It’s a mystery in space: Why would the Guardians of the Universe hide top-secret intel deep in the bowels of a secret vault on Thanagar Prime? That’s what Martian Manhunter, GL and Hawkgirl want to know! That’s not the only puzzler popping off either, as an ancient connection that bonds Kendra and Shayera Hol unlocks the secret of the map on Hawkgirl’s Dark Metal wings. Back on Earth, Starman and the Trinity look to create a wormhole that could transport them to Thanagar Prime. The only catch? It could vaporize them! (S) James TynionIV, Scott Snyder (A) Stephen Segovia, Mark Morales (A/CA) Jim Cheung

Avengers #13> FEATURING THE IRON FIST OF 1,000,000 BC!
ANDREA SORRENTINO JOINS SERIES WRITER JASON AARON another flashback tale of the Prehistoric Earth’s Mightiest Heroes. Meet the primordial woman who was the first to harness the power of the heart of the dragon Shou-Lao, becoming the very first Iron Fist. (S) Jason Aaron (A) Andrea Sorrentino (CA) Steve Epting

Smurfs Take> Another step back in time and an interesting choice of characters to focus on. Of course there is an Iron Fist that would be running around with the rest of the gods. Can’t wait to see how all of this fits together. 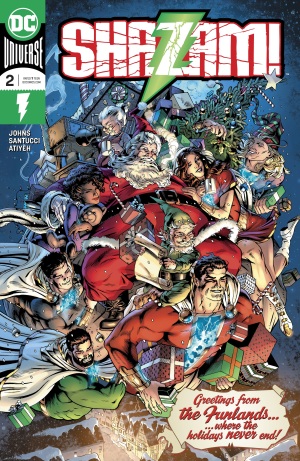 Shazam #2> “Shazam! and the Seven Kingdoms” part two! The acclaimed team of writer Geoff Johns and artist Dale Eaglesham continue the first all-new ongoing SHAZAM! title in decades!
Billy Batson has uncovered a secret deep within the Rock of Eternity that sends him on his most personal mission yet-one that threatens to tear apart his family! Meanwhile, the truth behind the Rock of Eternity’s purpose and its forbidden past unveils new and familiar worlds (that Dale may go mad drawing)! Plus… talking animals?!  (S) Geoff Johns (A/CA) Dale Eaglesham

Smurfs Take> I liked the first issue and a little mystery to build off of. To be honest I have always wanted to know about the Rock of Eternity and is perfect to build a story off of. I’m not all that sold on the Shazam family returning. The only one that showed any promise as a character was Mary Marvel. Too much too fast? 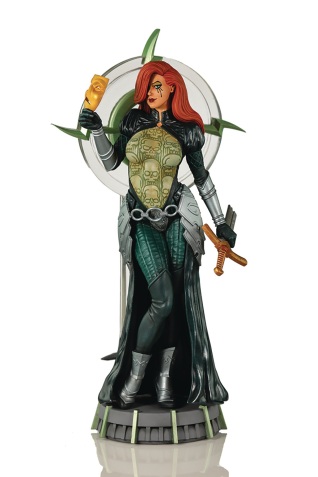 Joseph Linsner Dawn Statue> Dawn, the goddess of rebirth, has been one of the most enduring characters in independent comics since her creation by artist, Joseph Michael Linsner, in the late 1980s. With sculpting by RVCKVS International, and continued guidance from her creator, Dynamite has spared no detail in bringing this iconic comic book idol to life.

Smurfs Take> I know I haven’t done a statue of the week for some time. Can only take so much from another version of Batman. But this one is a little different than your average statue. For one it’s been a very long time since we have had a Dawn statue and the detail on this is stunning. I know she has fallen to background since not having her own series so this might be a good sign. I’m not sure if she is going to work into the Women of Dynamite series but would love to see an Arthur Adams take on her.