A Walk in the Woods

Recently I reconnected with an old friend of mine that I had fallen out of touch with for some time. We reunited the night he joined me on my Wanderer’s journey to cover the Denver Mac & Cheese Festival.

After a night of sampling a variety of macaroni and cheese dishes and mingling, we retreated to his house where we watched the Denver Nuggets lose a tight game to the Portland Trailblazers. In between cheering and sighing at his large flat screen we caught up on each other’s lives.

It was fantastic to get back with a friend who had meant so much to me for so long. On my end, I had failed to make enough of an effort staying in contact, and was ecstatic at overcoming my lapse.

As the night drew to a close we made commitments to get together again. We also planned to do a better job of connecting with each other in general.

Before I left to head home, this friend handed me a book and told me he thought I might enjoy the story and the humor within. That book was A Walk In The Woods: Rediscovering America On The Appalachian Trail.

A Walk In The Woods was written by American author and journalist Bill Bryson. It was released in 1998.

Bill Bryson formerly worked at the British newspapers The Independent, and The Times. He has also written an array of travel memoir books. A Walk The Woods is a first person narrative perspective of his attempt to hike the 2200 miles of the Appalachian Trail.

Bryson, after living twenty years in England, had recently moved back to New Hampshire (ironically, in New England). When out on a leisurely stroll in the woods near his home he stumbled onto the local section of the Appalachian Trail. This unique discovery of the understated, yet renowned, walking trail piqued his curiosity.

He abruptly decided he would hike the AT. He came to this decision before doing any research about the trail or acquiring any actual real world knowledge about the arduous journey he was planning to embark on.

After his decision and commitment to the act, Bryson performed extensive research on the Appalachian Trail. He dove deeply into its history and, most pressingly, on the dangers that were in store for him. These included everything from ticks and the Lyme disease many of them carried, to getting mauled and eaten by a black bear, to getting murdered by some random psychopath that most likely would never be caught by authorities.

Even with a bit of psyching himself out through his research, the author remained steadfast in his commitment to the feat. He put out a pre-internet era call to action to his network in hopes of getting some friends, or failing that, anyone to join him on his south to north cross-country hiking and camping trek.

Not surprisingly, his invitation goes unaccepted by nearly everyone. All except a hapless, overweight, mess of an old friend named Stephen Katz. The two rendezvous and proceed on what will become a life-altering, possibly even transcendental, journey through (as the title suggests), the woods.

I don’t want to spoil the story, but the tale runs through a full range of emotions. These include elation, accomplishment, and love; as well as fear, desperation, disappointment, and defeat.

The author’s musings, added with the actions and words of his buddy Katz, provide humorous comic relief. Without these laugh-out-loud moments the book would have been dull and, at times, depressing.

Readers should be forewarned. There are moments where you will experience deep disappointment in some of the characters’ decisions. At first glance their choices do a disservice to the enjoyment of the story.

However, I cannot judge the author or his friend too harshly. Nobody’s perfect; not Bill Bryson, not Stephen Katz, and definitely not me. After digesting the the book in its entirety, these moments are the ones that make the expedition the most real. 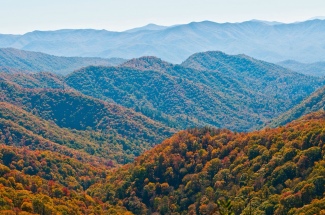 Bryson pairs the story with historical references and tidbits that give additional perspective on the various settings and features along the Appalachian Trail. He also spends extensive portions of the book chronicling the conservation, and lack thereof, of the Appalachian Trail and its surroundings.

Bryson details the trail’s creation and tumultuous history, the US Forest Service’s involvement, or lack thereof, as well as interesting morsels about some of the AT’s most infamous hikers and outdoors-people.

Before reading A Walk In The Woods, I knew of the Appalachian Trail.

I was aware it resided on the vast Appalachian mountain range that spanned much of the eastern seaboard of the United States. I recall being taught that while those mountains are much smaller than my home mountain range of the Rockies, the Appalachians are significantly older.

I also knew the Appalachians hold a rich history. There were a vast number of battles held there throughout the Revolutionary and Civil wars.

Finally, I was aware that people hiked the Appalachian Trail. Conceptually, this idea was as foreign to me as the thought of what it would be like living in Asia or Africa.

I knew no more than that.

After completing A Walk In The Woods, I had gained tremendous knowledge about the AT. I feel like I have a newfound familiarity with it. Even though much of this new knowledge will be filed away as trivial, I still thoroughly enjoyed learning it. 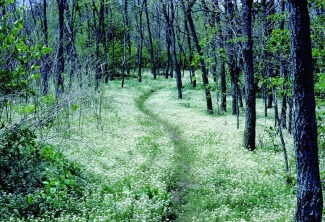 The book was really good.

Between similarities with my current career goal of becoming a full time professional writer, and the style with which many of my own stories are written (see: Where Discipline is Born, Return to the Library, & Denver, I am in you!), I could see why my friend had recommended the book to me. It was as if reading the book was like holding up a mirror to my own transitions, journey, and desires as of late.

I couldn’t tell how much my own aforementioned journey positively skewed my enjoyment of this prescribed reading. Additionally, I cannot be one hundred percent certain that some of my feelings toward the tale aren’t in response to having grown up in central New Jersey; just a stone’s throw away from the Appalachian Trail.

That’s one of the interesting things about reading books and, to a greater extent, consuming media in general . Sometimes it just happens to be the right time to take in a story.

I recommend reading A Walk In The Woods to anyone endowed with a propensity for hiking, the mountains, or even broadly towards nature and the outdoors. This was a worthwhile story to consume and process.

In the end, I wholly enjoyed the book. It has given me some additional perspectives to carry forth in life.

If you enjoyed this piece please check out more amazing content at: