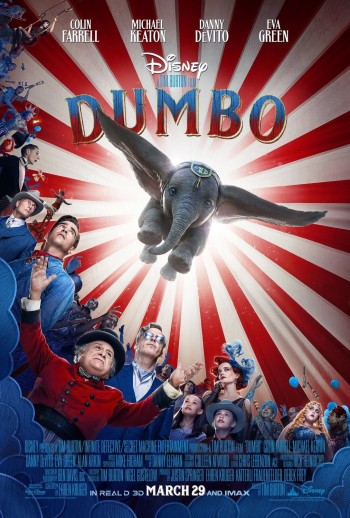 Disney is on a mission to live action all their classic cartoons. I thought “Jungle Book” was pretty good and they did an excellent job with “Beauty and the Beast” so next up is “Dumbo”. But, can the visionary master, Tim Burton, make one of the oldest Disney classics relevant and entertaining in today’ world?

*The MEAT* Of course the story has been updated for today’s politically correct world, after eighty years, a lot of changes were needed. They also took out the songs and talking animals to which maybe wasn’t the best of ideas. While Burton’s vision was spectacular as always, it just wasn’t enough to save this film from its overall story that was definitely *Missing Something*.

*The POTATOES* As much as I am a fan of Michael Keaton, and love watching him perform, I am also equally not a fan of Colin Farrell. Sorry, I just don’t see why Colin is still a leading actor in Hollywood. But anyways, Eva Green and Danny DeVito do a *good job* in this film.

*The Verdict* “Dumbo” just *Did Not Entertain* me like the old classic cartoon did. But I wasn’t the only one because I saw it in a theater full of kids and they were bored and restless during most of the film. For that main reason, I cannot recommend this film. Save your money for “Aladdin” and “Lion King”, I’m hoping Disney does better with them.