#NewComicsDay A Marvel heavy week for sure but a lot of terrific choices, be sure to grab Avengers, Amazing Spiderman, and Doctor Strange. For the top five that you should not overlook here are Smurfs picks to help round out this week’s pull. All of this insight sponsored by All C’s Collectibles, support your local shop and us with a like and a share.

Spider-Man Annual #1> When Spider-Gwen’s dimension-hopping web-watch falls into the wrong hands, it’s up to everyone’s favorite wisecracking web-slinger, the wily waddler known as SPIDER-HAM, to save the day!
From the same creative minds that brought you INTO THE SPIDER-VERSE and Spider-Gwen creator JASON LATOUR, you won’t want to miss this interdimensional epic! (S) Jason Latour, Phil Lord (A) Jason Latour (A/CA) David Lafuente

Smurfs Take> This is absolutely perfect! I have had a long love for this character since his first issue and never thought he would make it this far. A throw away idea that is pure gold and hate it took this long to get it. Can’t wait till he gets his own cartoon show! 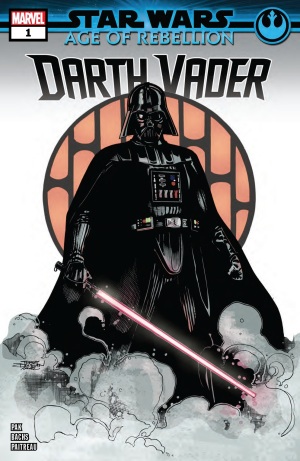 Star Wars AOR Darth Vader #1> YOUR HUMBLE SERVANT VADER!
DARTH VADER may be the most feared man in the galaxy. But to the proud Grand Moffs of THE EMPIRE, he’s just the Emperor’s apprentice – below them in the hierarchy. But what fury burns in the heart of a SITH with such overwhelming rage when a mere Moff dares command him? And at what point does Darth Vader show them his true power? (S) Greg Pak (A) Ramon Bachs (CA) Terry Dodson, Rachel Dodson

Smurfs Take> I have yet to be disappointed in the Vader titles so far. The stories have been epic and a great way to add to the legend and cannon of Vader. I’m not a fan of all the title jumping and yet another restart to a book that was fine the way it was. The story and idea sounds good and a chance to learn more on the Moff ranks but could it be a little too dry.

Smurfs Take> Oh my god it’s the return to the 90’s again. I loved MCP back in the day and to see these two team-up again warms my heart. Something about Keith’s style that fits Wolverine so well and some of the best stories for him have been under the guiding pen of Chris. This will fun and you really can’t go wrong with.

Flash #73> “The Flash Year One” continues! As our hero picks up the pieces from his disastrous defeat at the hands of the Turtle, the rise of the Rogues in Central City gives the Flash renewed resolve. But Barry is still learning to master his abilities, and while an experienced speedster might know how to outrun a gun, this time he may not be so lucky… (S) Joshua Williamson (A/CA) Howard Porter

Smurfs Take> Well who knew the Turtle was such a badass? Last issue was great and I have to say I am digging the back to the roots approach and story. I think this is the best thing they could have done for both the title and the character.

Smurfs Take> Maybe this is just hitting for me at the right time, the show right around the corner. I loved the first issue and defiantly hit an itch I didn’t know was there.