#NewComicsDay The last books for the month of July are here and so are Smurfs High Five sponsored by All C’s Collectibles who is giving you a discount at check out by mentioning this.  Other hot issues today are Thanos, Conan, FF, and Marvel Comics Presents that should not be overlooked. It’s a full week to say the least and we are here to help you with it. 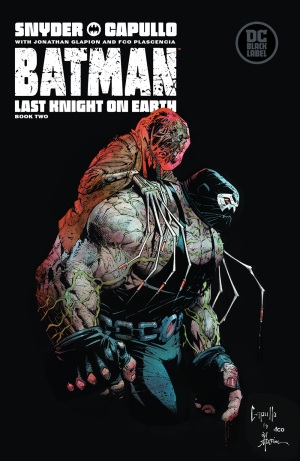 Batman Last Knight on Earth #2> The world has been destroyed, and Batman is on a quest to find out who’s responsible. But when villains from his past begin to complicate things for the Dark Knight, he finds an unlikely ally in a place known as “the Plains of Solitude.” (S) Scott Snyder (A) Jonathan Glapion (A/CA) Greg Capullo

Smurfs Take> The first issue was a masterpiece! The story and art blended together to form a flawless comic that I feel will remain timeless. It was tough picking a top book this week; I try to avoid having multiple books with the same character. That can prove challenging and with the Man Who Laughed also landing this week made it impossible. I chose this one because of everything mentioned above. 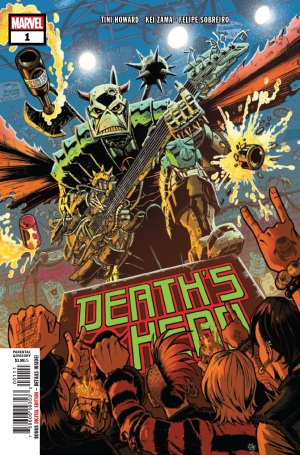 Smurfs Take> Well here is a blast from the past. Of all the characters to bring back from the 90’s and Marvel UK I did not expect Deaths Head. I think it’s a terrific idea to be honest and something different from the house of ideas. The character was always a little odd and may find a new life in the ever changing landscape of comics.

The Cape Fallen #4> One by one they were consumed by Darkhole’s violence, until only two remained.
Eric has lost the battle against his personal demons and accepted his role as executioner to anyone he deems a threat. Are his dead father’s words enough to pull his soul back from the Hellfire? Can anything stop this avatar of evil before more lives are lost? Find out in the final chapter of The Cape: Fallen, by the Eisner Award-nominated team of Jason Ciaramella, Zach Howard, and Nelson Daniel. Explore your dark side. (S) Joe Hill, Jason Ciaramella (A/CA) Zach Howard, Nelson Daniel

Smurfs Take> When I saw the first trailer for Brightburn I thought it was The Cape; much to my disappointment that wasn’t the case. I think this title is great, something completely different from what I was expecting when I first picked it up years ago. Not everyone is meant to be a hero and the exploration of the darker side of a person this book does is fantastic. This is not your average hero book; it’s something better and way beyond that.

Batman Who Laughs #7> It’s the final showdown between Batman and the Batman Who Laughs… but how do you defeat a foe who knows your every instinct and every move? Bruce Wayne will have to outsmart Bruce Wayne in this ultimate test of good versus evil. You can’t miss this finale to the epic miniseries that will tear up the very foundations of Gotham City! (S) Scott Snyder (A/CA) Jock

Smurfs Take> The series has been awesome! It’s only this far down on the list because I don’t want back to back bat titles. I am excited to see how this all ends, but let’s face it I doubt that this is the last of this character. He has turned out to be a much larger hit than I think everyone thought he would be and I include myself in that statement. I think we have a new villain that has achieved legend status for sure.

Avengers #22> THE CHALLENGE OF THE GHOST RIDERS STARTS HERE! Robbie Reyes wants to get rid of the flame-headed monster inside him. So it’s time to do the common sense thing: perform an exorcism on his car. Only problem is, Johnny Blaze, the king of Hell, has some plans of his own for the newest Ghost Rider and his Avengers friends. (S) Jason Aaron (A) Alberto Alburquerque (A/CA) Stefano Caselli

Smurfs Take> At long last the story arc I have been waiting for. I always wondered if this was going to happen when they had Ghost Rider as a member. A chance to see what happened to the rest of the riders, and just what is the state of mind Blaze is in. I really want a completion to the Danny character or even his return to the Marvel U. In the end it doesn’t matter, this is a great title and I enjoy it so much.