#NewComicsDay Its official, summer is over as the last of the kids report to school. Now’s the time to get caught up on what you missed, what’s new, and maybe a little experimenting for good measure and Smurfs here with a #Top5 to help. Seems like a return to the 80’s on the shelves this week but don’t over look Conan, Batman, and Power of X. All of this and more can be yours at our sponsor All C’s Collectibles.

Middlewest #10> Abel is brought before a long-forgotten figure from his past who offers some insight into the boy’s present and future. Feeling the weight of this unexpected reunion, Abel is left as he has been most of his life—cold and alone. (S) Skottie Young (A) Jorge Corona

Smurfs Take> Well you know what the first thing I’m reading when I get the chance today.

Transformers 84 #0> An all-new prequel to the original 1984 Transformers #1! Celebrating 35 years of Transformers!
War has gripped the planet Cybertron, but an even deadlier threat looms-an asteroid belt powerful enough to destroy the metal world unless Autobot Field Commander Optimus Prime and his heroic recruits can clear a path for the planet. But what other motivations does Prime have for this mission? And how does it tie to a secret on Earth in the eleventh century?
Celebrating 35 years of TRANSFORMERS!
Reuniting the Transformers: Regeneration One team of Simon Furman and Guido Guidi!(S) Simon Furman (A/CA) Guido Guidi

Smurfs Take> And this would be book number two that I read for sure this week. Seems like it’s the walk down memory lane this week in titles starting with this one! I remember I couldn’t get enough transformers and must have read issue one about a million times the day it came out and to see the original team back together for this is terrific. I may be the only one on this and that’s fine but I love the Gen One Transformers. 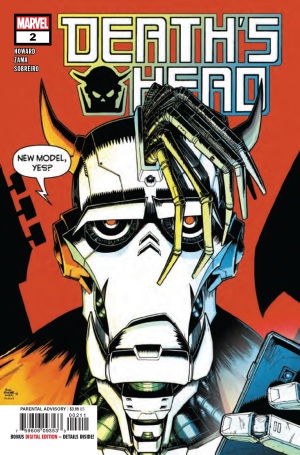 Deaths Head #2> RENEGADE UPGRADE!
Billy Kaplan’s been keeping a secret – and this time, there’ll be no wishing away the consequences. What’s a “younger,” upgraded version of Death’s Head doing in Wiccan and Hulkling’s apartment?! Death’s Head goes on a shooting spree for answers – but he just might find himself outmatched this time. (S) Tini Howard (A) Kei Zama (CA) Nick Roche

Smurfs Take> Well I can’t believe they actually brought him back and I can’t believe how much I liked the first issue. No doubt about it this is the original character and it is glorious!

Hellboy and the BPRD Saturn Returns #1> A small town in New Hampshire that has been plagued by disappearances is shaken when a local discovers a pile of corpses that date back decades, and Hellboy and B.P.R.D. Agent Kinsley arrive on the scene only to be overwhelmed by supernatural theories for the ritualistic killings.
Mike Mignola and Scott Allie team up with veteran Mignolaverse artist Christopher Mitten, along with new colorist Brennan Wagner and letterer Clem Robins. (S) Mike Mignola, Scott Allie (A/CA) Christopher Mitten

Smurfs Take> Oh, a fresh new story with Hellboy and the BPRD you say? Why yes I think I will have one of those please.

Smurfs Take> If there is one trade you get, if not today but this year it’s this one. I know I normally don’t list trades or Compendiums in the top five but for this I’m willing to break my own rules. This is actually shipping ahead of schedule and is a great “Treat Yourself” item. The work that Brian and Fiona have put into this world and story is incredible and know right where to hit you in the feels with characters. This for sure is a must read!