#NewComicsDay My God it’s a great day to be a comic book enthusiast! The shelves are loaded with all kinds of treats as the villains run wild in DC, Marvel is full of all types of carnage, and that’s just the start. Smurf has his normal top 5 but it wasn’t an easy pick with a couple of add-ons. Get to the shop early, they are going to go quick, and don’t forget the All C’s Collectibles Fan Expo right around the corner with free admission.

Batman Curse of the White Knight #3> Batman salvages a groundbreaking clue from the wreckage of Wayne Manor and recruits Harley Quinn to confront The Joker for answers about the mystery of Gotham City’s foundations! Their investigation takes a dire turn in the darkest corners of Arkham, and Gordon’s life is in peril after a new commissioner is named. (S) Sean Murphy (A/CA) Sean Murphy

Smurfs Take> When I finished the first series I thought there was no way they could do a sequel; Not only was I wrong but it’s built off it and has made the entire story even better. Murphy has truly outdone himself!

Amazing Spider-Man #30> ABSOLUTE CARNAGE TIE-IN!
Spider-Man has been a huge part of ABSOLUTE CARNAGE, but this is when his part gets REALLY crazy…Only Spider-Man stands between Carnage at his scariest ever and young Dylan Brock.There is so much more to it, but WE DO NOT WANT TO SPOIL IT! (S) Nick Spencer (A/CA) Ryan Ottley

Smurfs Take> Thankful Spencer has not been as much a detriment to this title as Cap. The very opposite in fact and has done a great job. So much so for me that I’m excited to see what he does with a character as blunt and brutal as Carnage. 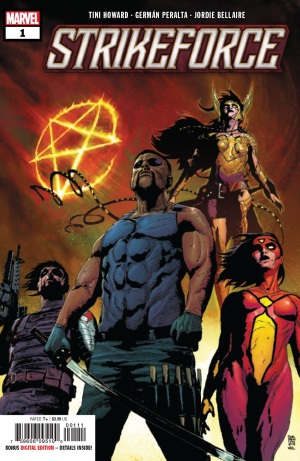 Strikeforce #1> NO COMPROMISE. NO MERCY.
ALL NEW, ONGOING SERIES!
From the dark minds of rising stars Tini Howard and Germán Peralta comes a tale of the underside of the Marvel Universe! A new threat is secretly taking over the planet — and the more people who know about it, the more powerful the threat becomes. Blade dealt with this threat once before, and hoped to never have to again. He can’t bring the Avengers in on this — not just for their own safety, but for the safety of everyone on Earth. So he must recruit a team of heroes accustomed to darkness — a strikeforce. Blade, Angela, Spider-Woman, Wiccan, the Winter Soldier, Monica Rambeau and Daimon Hellstrom join forces to fight the fights that no other Marvel team can take on!  (S) Tini Howard (A) German Peralta (CA) Andrea Sorrentino

Smurfs Take> Ok…here’s where I am sitting on this; I like all of these characters. There isn’t one in the group that I would trade for another or even scratch my head on. Now I have to ask is the story going to be strong enough for all of them. It’s difficult enough to do a team book with well established characters. Don’t get me wrong, this will be the first title I read this week with all of the excitement and hesitation bottled together as I turn the pages.

Batman Superman #2> The Batman Who Laughs’ plot is bigger than either the Caped Crusader or the Man of Steel realized. Following a showdown with the devious killer’s first sentinel, a jacked-up, Dark Multiverse-infected Shazam!, the pair has to figure out who else has been targeted for similar transformations. Their first two guesses: someone very close to Batman and the one hero that would make failure nearly impossible-Superman himself! (S) Joshua Williamson (A/CA) David Marquez

Smurfs Take> The first issue was not a disappointment! I can’t tell you how happy I was by that and this week’s looks just as strong. If it wasn’t such a big week I could see this taking the number one spot for sure, and if this book or title are not on your radar they should be. 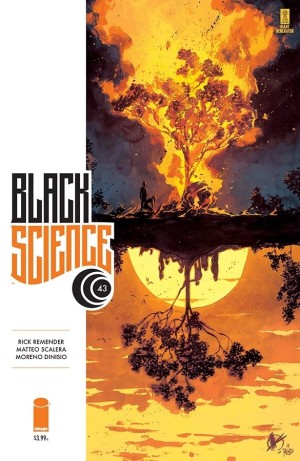 Black Science #43> “NO AUTHORITY BUT YOURSELF,” Conclusion Grant McKay has seen everything there ever was, is, and could conceivably be, but he still has one final choice to make. This is it. The end of RICK REMENDER and MATTEO SCALERA’s seminal science fiction epic—featuring a stunning wraparound variant cover from ANDREW ROBINSON! Don’t miss it for the world. (S) Rick Remender (A) Moreno Dinisio (A) Matteo Scalera

Battle Chasers Anthology TP> Collecting every issue ever published of one of the most beloved comic book series of all time, this new trade paperback edition is bursting at the seams with adventure! Follow young Gully as she searches for her missing father with the help of Garrison, a legendary swordsman; Knolan, the crafty wizard; Calibretto, an outlawed Wargolem; and the notorious mercenary Red Monika! Assaulted at every turn by a cast of memorable villains, BATTLE CHASERS is packed with over-the-top action from cover to cover! (S) Joe Madureia (A) Joe Marureia Vince Russel Scott Williams

Smurfs Take> This had to be one of the best Image titles back in the day. It was perfect the only problem was they never finished it. I know when the game came out last year there was talk about its return but nothing yet. I have all of the issues, every single variant you can think of and I’m still going to go and get this for the read because it’s just that inspiring. 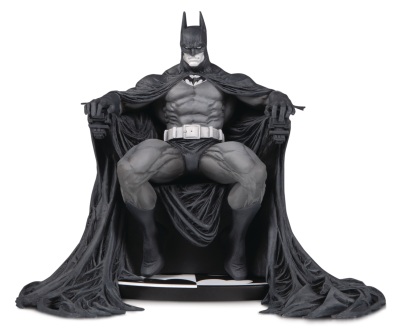 Batman Black and White by Marc Silvestri> Batman is famously known for his stealth and ability to go unseen. He must be quiet and subtle to succeed. However, the latest statue in the BATMAN: BLACK & WHITE line is anything but reserved. Sculpted from art by Marc Silvestri, this Batman is imposing and bold as he rests in a chair in the Batcave that feels almost thronelike. The polyresin statue captures the sinister detail of Silvestri’s cape, which was drawn with an organic texture, providing an ethereal aura to this already striking piece.
•  Limited to 5,000 pieces and individually numbered
•  Statue measures 5.9″ tall
•  Allocations may occur

Smurfs Take> Yeah, like I was going to leave this little beauty off my picks! Look at it! I love Silvestri’s work and his command of a page and I hope one day to see him return to X-Men. But for now I will be happy with this as a substitute.