A Dream of Power 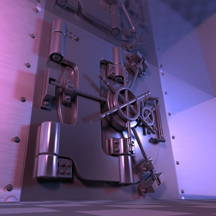 “Alison, my dear, would you like to see something?” The Controller grinned at his stunning, deadly cohort.

Bounce knew he wasn’t asking her permission, but she played along with his romp. She summoned her most girlish voice, “I do so love your surprises.”

The sinister scientist swiped the screen of the elevator a couple of times with his index finger tip.

The VIM executive elevator they were standing in came to a halt. One of the wood panels on the rear of the car slid open partway and revealed a hidden compartment. A metallic plate slid forward and flipped. Facing them was an eight by eight inch digital hand scanner. The Controller casually placed his hands on the interface. It scanned from top to bottom and back again.

An electronic voice sounded from unseen speakers within the lift, “Identity confirmed.”

The elevator silently resumed its high speed descent. It traveled further down than Bounce had been before. She estimated they had gone far below the tall building’s basement before the elevator car arrived at a smooth halt.

The darkly dressed woman began to feel her heart-rate rise in anticipation. She regulated her breathing. She preferred to hide her emotion. She felt an expression of her excitement was a weakness.

The plain back panel of the elevator slid sideways revealing a sterile hallway. Fluorescent overhead lights, pale gray floors, and blemishless white walls told her that she was about to enter a lab she had never seen.

Bounce had acted as the Controller’s unquestioning muscle and assassin, and at times she was even his consort. But he rarely confided in her. This moment was special indeed.

“You certainly are full of surprises,” Bounce told her boss. She found her excitement uncharacteristically difficult to mask. She wondered what the Controller was about to show her. She resisted the urge to ask. If Stanton had brought her down here it was either to share some information he had decided she needed to know, or that her usefulness had come to an end. If it was the latter, he was going to attempt to perform one of his twisted experiments on her.

The dangerous woman wasn’t afraid. With her ability she felt more than capable of handling any threat, even from Seth Stanton.

The Controller entered the grim hallway. Bounce followed silently behind. Patience was one of her favored attributes.

The two came upon a control room. A lone chair sat in front of a security console in the corner. There were many monitors at the work station. Most displayed a camera feed from some sort of cell. Inside of each was a lone bed covered with a white sheet, with no other furniture or decor. A patient was inside each room. Each one wore a white gown that matched the bed sheets and walls. They all had shaven heads.

Bounce had seen many of the Controller’s other labs. She had witnessed his wretched experiments silently and dutifully before. What she saw presently on the screens seemed entirely different from those familiar others.

The final four screens displayed some sort of living quarters. On one of them a man was sitting on the couch. Bounce couldn’t tell who it was or if she had seen him before. All she could see was the back of his head.

At his beckoning command the woman resumed walking. Her control over her emotions was loosening. Curiosity betrayed her. “What are we doing here?”

The Controller ceased his walking. On either side of them was a metal door. A small slot was set at eye level. Another larger slot was at waist height. Bounce knew two of the “patients” she had just seen in the vid-feeds were behind these doors. A light tinge of regret and sadness arose. What’s happening? she wondered. She forced the nervousness out as quickly as it appeared.

The Controller spun on Bounce. He looked at her over the top of his eyeglasses, seriousness within his visage. “We’ve known each other for some time, my friend,” an unsettling emphasis hung over his choice of word. “You’ve seen so much of my empire. Yet, I don’t believe I’ve ever shared my dream with you.”

“Why do you think I do all this?” The villain continued his monologue, “Have you asked yourself what for? Why gather you and the rest of the family? Why all the interest in powered people in the first place?” He regarded his most dangerous liaison with a blank stare, devoid of obvious emotion. He was unmoved by her tight black dress and her tall black heels.

Bounce didn’t know how to respond. She knew he was obsessed with understanding the Effected. She correctly assumed he wanted powers of his own, and that he was jealous of her, but she wouldn’t tell him that. She remained silent and waited for him to go on.

After an uncomfortably long pause he did. “Alison, I’ve brought you here to let you a bit deeper into my world. I must remind you of something before we proceed.” He paused again, unblinking.

Despite her own deadly ability she knew her boss and mentor wasn’t bluffing. She swallowed deeply. All she was able to say was, “Okay, sir.” With that the Controller turned and continued down the sterile hall.

The Controller and Bounce arrived at a large vault door at the end of another longer hallway. The diabolical scientist looked up at the height of the door with a now humorous expression. Another electronic palm pad rose from the floor a foot in front of where he stood.

An electronic voice responded to his verbal input from unseen speakers overhead, “Command accepted. Alison Jeffries a.k.a. Bounce, please place your hand on the control pad.”

The Controller let out low chuckle. Bounce glanced at him. She remained uncertain. She hadn’t felt this weak since before her ability to control others had manifested. Her boss nodded toward the device, “Don’t be shy.” He chuckled yet again.

The deadly woman did as her boss and mentor bid. She placed her palm face down on the glass. She could feel warmth of the light from the scanner as it moved across the glass under her hand.

The cold digital voice returned, “Identification received. Please stand back as the door opens.” The hand scanner retracted back into the floor. The Controller took three steps backward. Bounce mimicked his movement.

Components on the metal door began to move and spin. The door’s thick bars slid and disappeared into the steel frame. Finally the massive door clicked and swung out toward them.

To her surprise Bounce recognized the living chamber beyond the door immediately. She had seen it on the security room’s video monitor. It looked larger than the screens had presented it. The area within resembled the inside of a single family home.

The Controller and Bounce stood at the entrance. They were looking into an entry foyer with a tiled linoleum floor. Rooms were on both sides down the hall’s length. The foyer came to a T at its end.

Stanton didn’t hesitate. He walked in as if it were his home. Bounce paused briefly and then followed him in.

They passed a modern kitchen on their right. A bathroom was a little further across the hall. They continued on and turned right at the foyer’s end.

The next hallway had two closed doors on either side. Stanton walked by those. Bounce followed, stepping softly as if to not damage the thick beige carpet below her feet.

The two stopped just short of the entryway to a large room. Bounce could see a grand crystal chandelier hanging a mere two yards ahead. Stanton placed a stiff arm across Bounce’s waist, gently preventing her from proceeding into the large room. He face displayed a grand sense of pride.

“What I want to show, or shall I say, who I want to introduce you to, is just inside this room. His name is Nero.” The Controller paused, getting lost in his thoughts for a couple of seconds.

He snickered another low laugh and then said, “I’ve only been able to contain him thus far. He has been, shall we say, difficult. I want you to convince him to use his abilities for me… and for us.” The Controller didn’t take his eyes off of hers. Then he removed his arm from her path.

Bounce moved slowly onto the landing in the entry of the room. It was a the top of staircase heading downward. Uncertain of herself, Bounce crossed her arms in front of her chest. She surveyed the room below.

It looked like an ordinary living room. Stanton had designed it to appear quite comfortable. There were two tan leather couches in the center of the room. A large projection screen was on the wall in front of them. The screen displayed some sort of psychedelic images with looping colors and shapes. The man watching it was quite engaged.

It was the man she had seen on the screen earlier, but Bounce now saw it wasn’t a man at all. He was scrawny; just a teenage boy.

The young man had tan skin and thick dark messy hair. Bounce decided he must be Latino or southern European. He was shirtless and wasn’t wearing anything on his feet either. A thin leg dangled and swung over the arm of the sofa.

Bounce realized she could feel his presence. She knew he could feel her too. As if on cue the boy tilted his head back and looked up at her through dark eyes. A few strands of his oily hair rested limply on his forehead.

The boy remained in the position he was sitting on the couch. He floated slowly up towards Bounce. He halted a few feet from her just below the chandelier. Crystals swayed away from the boy as if trying to flee him.

Still upside down the boy regarded Bounce with an innocent look.

Finally, he spoke, “Are you here to play with me?” 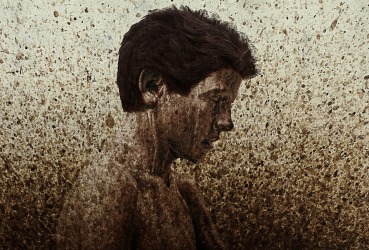 And if you haven’t read the rest check it out here.

John Andreula is a writer and dreamer in the foothills of Colorado.

Reach him for commission work or media requests at: