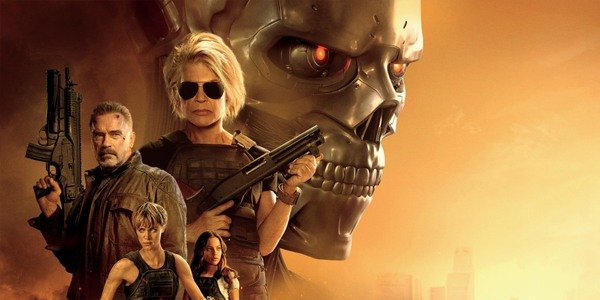 After three movies, two reboots and 28 years, the Terminator franchise is back in its creators’ hands, James Cameron. Now, I loved the first 2 Terminator movies that Cameron was the Director of, but I have been severely disappointed with everything else afterwards so, I’m expecting Cameron, as Producer to right the Terminator franchise with “Terminator: Dark Fate”. But I am concerned because the previews are not looking to good.

*The MEAT* The story has been done before; it is a combination of the first two Terminator movies with a significant political statement for our times. Plus, more time travel confusion, which is getting old. But, where the story lacks, the *Action is Off the Charts Good* and it is done well with very exciting scenes. But I must tell you, the first five minutes of this film still has me scratching my head and wondering what they were thinking.

*The POTATOES* Linda Hamilton is back, reprising her role of Sarah Conner and she plays her pretty bitter to say the least. Arnold is back of course, and he is the same deadpan robot as always. The three newcomers bring new blood and enthusiasm to this franchise, but honestly not very memorable. Overall the acting gets a *Midgrade* from me.

*The Verdict* Well, “Terminator: Dark Fate” is the best Terminator movie since “T2”, but that is not saying much. If you are a Terminator fan and love the first two films, you will be disappointed with this. Now if you want to see some serious action and don’t care much for a convoluted storyline, this movie will, at least entertain you. As for me, I think I just watched the *Death of a Franchise* because “Dark Fate” left me upset and just done with Terminator movies for good. I will just stick to the first two, and I suggest you do the same.