Dreaming of Something Different

Some things had improved since Stephen’s promotion…, Janice considered, And some things definitely hadn’t.

Stephen’s promotion to executive at VIM had alleviated the Stewart family’s sizable financial burden. They even had enough left over each month to save a significant chunk, as well as to invest for theirs and Sierra’s futures. The stress over money seemed in the distant past now.

For once it was nice not to worry about money. Stephen did buy that ridiculous electric sedan. He claimed he needed it to present himself as an executive. He felt his title demanded it.

If that and a few new suits were all he needed to feel comfortable in his new role, Janice would not argue with him. Besides, there was more than enough for them to afford it now, considering the increase in pay and the bonus her husband received with the upgraded title. Stephen had worked so hard for too long. Janice couldn’t debate him on a few frivolities.

The new position did nothing, however, to improve the couple’s relationship woes. Becoming an executive should have equated in a reduction of working hours and somewhat less job related stress than his prior analyst position. Unfortunately, that wasn’t the case.

She and Stephen still barely saw each other. They hardly spent any time alone together, and they hadn’t been intimate in over six months.

Janice still felt love for Stephen. She was still certain he cared for her as well, but it seemed obvious that their priorities and interests were no longer in alignment.

They still seemed to always find things to bicker about. Most often the arguments were related to the increasingly widening gap on how they each felt they should deal with Sierra’s eccentricities. Stephen just saw Sierra as slow. Janice knew better. Sierra was special.

Regardless of either’s stance on their daughter, Janice felt unsupported in her role raising Sierra.

Lately, Janice was recalling the old days. Like when Stephen used to play his tan acoustic guitar for her. She would come up with silly lyrics to sing over his chords. Stephen’s hands were so nimble; his fingertips always so swift. She missed that Stephen so much.

The guitar from her memory lay packed away in its black case in the basement. Stephen hadn’t plucked its strings since Sierra was two and a half. Like her’s and her husband’s bond, it was collecting dust, becoming forgotten. And just like Stephen, whenever he made it home, it too was sequestered away, never to be seen.

Stephen still excused himself at the end of the few dinners he attended with them. He still retreated to his locked workshop before Janice finished her meals. He still lost track of his nights, tinkering away on his machine.

One of Janice’s few friends, Mindy, lived across the cul-de-sac from the Stewarts. The two spoke whenever they met in front of their homes.

Their children would play outside, never together, of course. Mindy’s rambunctious sons threw footballs, rode bikes, or wrestled, while Sierra—well—she was just Sierra; sitting quietly in the garden, or staring at the pages of some book while Janice sat out on the lawn.

Like all the other neighborhood kids, Mindy’s boys, Trevor and Lance, thought Sierra was weird. The books and the quiet solitude were the only things the young, silent girl ever seemed to need though.

Janice didn’t really like Mindy’s sons. They rough-housed too much for her and they attempted to tease Sierra whenever they thought neither of the mothers were within ear-shot.

Mindy was another story, however. Mindy never treated Janice, or Sierra for that matter, with pity or awkwardness in any way. Janice found her time with Mindy a pleasant escape.

There was a refreshing kinship between her and her friend. She hadn’t felt that way with many others lately, especially her absentee husband.

One afternoon Janice was planting annuals in her meager front garden. Mindy came strolling across the wide grassy circle that sat in the middle of their cul-de-sac.

As she approached, Mindy waved her left hand above her head at Janice. With her other hand the plump brunette clutched a plate wrapped in blue plastic against her waist . Janice knew Mindy was bringing her some sort of baked good. Whatever pastry it was would likely taste awful. Mindy wasn’t a very good baker. Janice always appreciated Mindy’s sweet gestures anyhow.

Janice stood. Her knees ached from kneeling. She was glad to give them a rest.

“Janice,” her friend called when she reached the pavement at the end of the grassy island. “Hey, sweetie. How ya doing?”

Janice forced a smile onto her face and said, “Hey.”

Across the street Mindy’s front door flew open with a forceful bang. Lance had flung it open and ran out into their yard. Trevor came out after Lance and chased him. He shook his fist in the air and yelled curses.

The storm door swung shut with a slam behind them. Mindy flinched at the excessively loud thud of the metal. Janice watched the two boys, both clad in soccer shorts and shin guards, brawling with reckless abandon.

Without taking her eyes off the boys, Janice responded to Mindy’s greeting. She lied, “I’m okay.” Her words sounded weak.

Mindy sighed. Her pink-cheeked smile straightened slightly, but she didn’t surrender easily. “Darling, you look like you could do with a break.”

Mindy looked over at Sierra playing quietly in the garden soil. Sierra held an earthworm gently in her hand. She observed it intently.

“Hey, Si! You look absolutely beautiful today.” Mindy put her hand above her eyes to block out the sun.

Sierra raised her face from the annelid and directed a stoic gaze at Mindy for the briefest of moments. Just as quickly, she returned her attention back to the worm, which was crawling down her wrist.

Janice was dumbstruck. A look from Sierra was the emotional equivalent of a multi-sentence oration from anyone else, as far as her daughter’s responses went.

Without pause, Mindy redirected her attention back to Janice. “Here, girl.” She handed Janice the platter. “I made these for you guys.” Janice could see through the transparent wrap that it was cookies this time.

Mindy looked impressed with herself. “They’re peanut butter. Just get me the plate back whenever.”

Mindy went on, “How’s Stephen? Is he liking the new job?”

“He’s fine,” Janice replied, attempting to hide any emotion from her response. “He’s happy with the promotion. The new position comes with some challenges, but he’s handling the transition well.”

The lines around her mouth and forehead revealed Janice’s annoyance. “You know the answer, Min. You see when his car is gone, just the same as everyone else in the neighborhood.” She surprised herself with such a snappy reply, but that seemed par for the course recently. She had been hurting for some time and she had no regrets about her harshness.

The smooth, clear skin on Mindy’s face finally yielded a frown. Internally, Janice was relieved to see even Mindy felt pain like her.

But Janice’s neighbor and friend always had a way with recovering from a bad interaction. “Well, he doesn’t know what he’s missing…beautiful girls like you two at home. He just doesn’t know…” Mindy shook her head and put on her most disappointed face.

Her voice got softer, quieter. At a low whisper she said, “He’s lucky you don’t leave him for some young, more attentive hottie.”

And Mindy smiled mischievously. Janice couldn’t help but smile as well, even though the sadness remained in her eyes. Janice really did like Mindy.

“Speaking of hotties, have you met the new neighbor over in twenty-four?” Mindy nodded nonchalantly toward the unit she spoke of. “The quiet one. He always wears that silly hat. I brought him some brownies,” Mindy bit her lip slightly. “He seemed kind of nervous. I’m not sure why. It’s just little ol’ me. He sure is cute though.”

A wail erupted from one of her two sons. “Boys!!!” she yelled, barely looking back over her shoulder, keeping her eyes fixed on Janice. One of the two was pummeling the other in the chest while tears streamed down his face.

Mindy turned her head back to Janice, “I have to go. The boys have soccer…if I don’t strangle them before I get them there.”

She gave Janice a warm, sincere grin. “You and Sierra should come over for lunch one day this week. I’ll make something nice for you guys.”

“Thanks, Min,” Janice smiled back at what she felt was her only companion in the world at that moment. Mindy couldn’t possibly imagine how much Janice appreciated her words and her friendship. More than anything else, Mindy treated her and Sierra like they were normal. Janice loved her for it. “Lunch sounds nice.”

Mindy hurried back across the grassy circle. As she reached the other side she bellowed, “Let’s go! Now!”

The three loaded into Mindy’s black SUV. The truck reversed out of its spot and rounded the circle. Mindy blew a kiss to Janice while Lance stuck his tongue out at his mother. Trevor couldn’t contain his reaction and broke down in raucous laughter. Mindy rolled her eyes as she pulled away.

Janice raised her arm lazily. Her eyes followed Mindy’s truck as it headed up the hill and finally turned off their street.

A thought occurred to Janice then. It was odd that she hadn’t noticed the new neighbor. She hadn’t seen a moving truck either. She hadn’t been away from the house for any extended period, aside from her time at Sierra’s doctors.

Janice’s eyes roamed back down the hill and over to the front of number twenty-four. Like Mindy’s, that unit was identical to her own. At the kitchen window she saw the new neighbor. He was standing there, peering out his window. His blue and white bucket hat cast a shadow over the top half of his face. He was looking right in her direction, an arm comfortably up against his window frame.

Janice raised her arm in another lackadaisical wave. She forced yet another smile onto her face.

The man ignored her neighborly gesture.

He just turned away from the window, retreating into the darkness of the house. 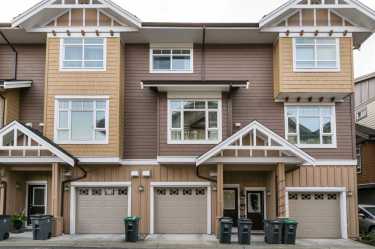 And if you haven’t read the rest, check it out here.