Who knew the comic book world could be so crazy and volatile? The last few days the rumors of Marvel buying or absorbing DC have been running rampant but reminds me of how quickly a publisher or a title can change hands like a hotdog from a street vendor. Perfect example is Star Wars leaving Dark Horse and going back to Marvel. Vertigo was a wonderful little bastion inside the DC world that produced some of their best material in my opinion. They have also been some of the more successful adaptations for film or the small screen in the last few years and Vertigo does hold significant shelf space for my trades. Not all of them are winners, and I won’t be listing everything they produced (Not sure I will list the Alan Moore stuff because he could just have his own section and he’s Alan Fucking Moore) as must haves but this one I think embodied the creative storytelling DC wanted to accomplish within Vertigo.

Fables> one of the most interesting and loved series in my collection that I would devour every month and then again when the trade came out collecting everything for that story arc. It was the perfect blend of character driven stories, fueled by fairy tales, lore, and creative energy unlike anything else. Our favorite characters of myth and legends on the run from their own dimension from the Adversary who had conquered every single one of their lands and now ruled over. Magic is real, they are real, and have been living in New York for hundreds of years. Story by Bill Willingham art by Mark Buckingham 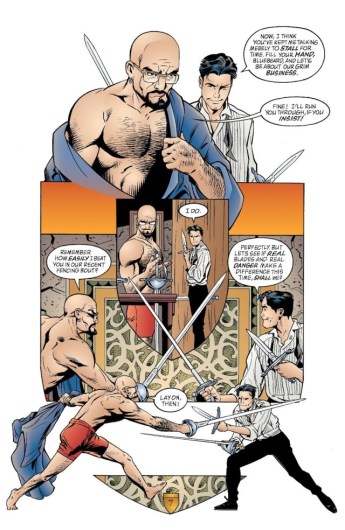 Key Points> The first trade by far is the best and paints this elaborate story establishing why the Fables are set up the way they are. The choice of characters that we start out with seem so odd at first some are an easy choice but you do find asking yourself why on a few of them. I have to say they all have a story, they are all important and by the end of it you will find yourself saying wow. The interactions are priceless and I loved how every character was working their own agenda, at first. While Pinocchio, The Big Bad Wolf, and Bluebeard were some of my favorites I enjoyed every moment involving Prince Charming, the witches from the thirteenth floor, and not really knowing what is going to happen from issue to issue. Half of the fun was figuring out just who some of the characters were and the artists interpretation of them in modern times. The moral of the story however is don’t get too attached to a character because some are around a shorter amount of time than others.

Negative Zone> The series only ran for 150 issues and not sure if it was time to go, DC shutting down Vertigo, or people were just losing interest. Yes it’s cool that characters die in the series, or get lost but I think that may have hindered it in the long run. With the loss of some key people and the revelation of the big bads identity it almost took the legs out from under it. I do think there could have been more exploration of the other worlds and lands, a few more expanding stories for the war would have been nice, and pushing the secret of the Adversary a little further into the series wouldn’t have hurt. Don’t get me wrong, it’s a fantastic run that I love but have had years and multiple reads to pick apart. It also didn’t help when ABC ripped off the idea with Once Upon A Time, which was a poor imitation of a truly compelling series.