#NewComicsDay and it’s a well rounded one at that. Seems like every publisher has something to pickup if the shelf isn’t over ran by Jokers. It can be difficult sometimes and you forget to pick something up but that’s why Smurf is here to start you off with his top 5. If you never want to miss a book and have them delivered be sure to ask our sponsor All C’s Collectibles for details. Now, without further delay your must reads for the week.

Three Jokers #1> Thirty years after Batman: The Killing Joke changed comics forever, Three Jokers reexamines the myth of who, or what, The Joker is and what is at the heart of his eternal battle with Batman. New York Times bestselling writer Geoff Johns and Jason Fabok, the writer/artist team that waged the “Darkseid War” in the pages of Justice League, reunite to tell the ultimate story of Batman and The Joker!

After years of anticipation starting in DC Universe: Rebirth #1, the epic miniseries you’ve been waiting for is here: find out why there are three Jokers, and what that means for the Dark Knight and the Clown Prince of Crime. It’s a mystery unlike any Batman has ever faced!

Smurfs Take> Here it is! The big one we have all been waiting for has finally arrived and with a hefty amount of variants. A comment made that many blew off as Joker just trying to mess with Bat’s, but the more we thought about it the more it started to add up. Luthor has done it a couple of times, why wouldn’t the Joker? I honestly think this will overshadow the war currently going on in the regular series, and no doubt it this will be the story everyone will be talking about. The question lingering on everyone’s mind however is, will it be cannon.

Locke & Key In Pale Battalions Go #1> The impossible, reality-bending keys of Keyhouse have always been weapons of war. In the spring of 1915, Chamberlin Locke’s oldest son, John, is desperate to be a part of the greatest war of all… and never mind that he’s too young to enlist. He means to use the power of the keys to turn the tide, and will tell any lie, and try any manipulation, to have his way. Prepare to open a door onto one of the grimmest battlefields of the 20th century, whose darkness might even strike fear into an army of supernatural shadows. (S) Joe Hill (A/CA) Gabriel Rodriguez

Smurfs Take> I love visiting Keyhouse! I think over the years I have liked the stand alone stories more than some of the regular series. This is a perfect example of working within and expanding an idea and story without beating it to death. The journey the reader has been on through this is fantastic and now no idea is too outlandish, no key is too obscure, and we all wait anxiously to see what will be revealed about the house next. 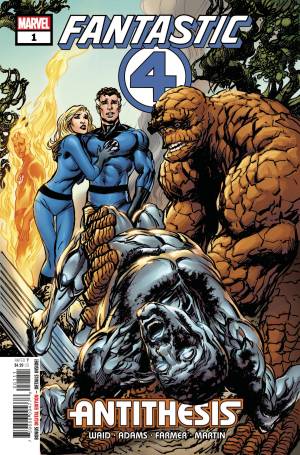 Fantastic Four Antithesis #1> The first full-length Fantastic Four story ever illustrated by classic creator Neal Adams! An unstoppable meteor of unknown origin has just erupted from hyperspace–and unless the Fantastic Four can find a way to stop it from hitting Manhattan, millions will die! (S) Mark Waid (A) Neal Adams, Neal Adams

Smurfs Take> I talked about this on the podcast a few months ago and surprised to see it hit relatively on time. Having Neal do an entire FF book is spectacular and I’m excited for his Surfer. Throwing in a story from a master at the top of his game in Waid is just an added bonus. Easy pull for this one to be sure, don’t overlook this title.

Spider-Man Noir #3> THE ADVENTURE CONTINUES!
A murder investigation may have led Spider-Man a thousand miles from home, but DANGER is close behind! And as the specter of war looms in Europe, a dangerous operative shrouded in mystery has designs of his own, with ELECTRO leading the charge! (S) Margaret Stohl (A) Juan Ferreyra (CA) Dave Rapoza

Smurfs Take> Am I the only one that hears Nick Cages voice when reading for Spiderman? I have enjoyed this title more than I thought I would and maybe haven’t given it enough credit. It’s original, a whole different view and take on the character that I honestly don’t know what’s going to happen. Simply enjoying a well crafted story as both fan and reader, well done.

Smurfs Take> Ok, looks like I’m back for more with this title. The first issue was good and I want to see where it leads. Guess I’m up for more crime and mystery with a dash of humor than I thought.